Learn More about our COP27 Initiative.


Our History at COP

MILESTONE MOMENTS
2000: COP 6, The Hague, Netherlands
The term Climate Justice was first used.  We were there!
2001: COP 6, Part 2,  Bonn, Germany
The Environmental Justice Climate Change Initiative (EJCC) was founded. We were there! 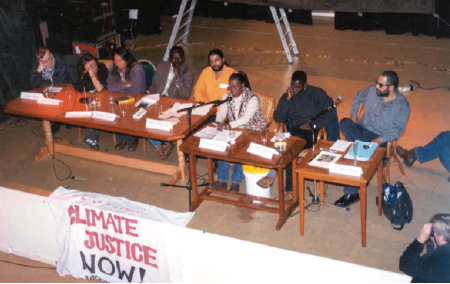 Dr. Beverly Wright traveled to South Africa and Zimbabwe to attend the International Education Conference of the National Association of Black Social Workers. The conference was held July 26, 1996—August 9, 1996.  Dr. Wright presented a paper during a morning Plenary Session, which was followed by a breakout workshop on the topic “Environmental Justice.”

As a part of the Advocacy Bridge Program, Dr. Wright traveled to Geneva Switzerland in 1999. This is a program of the International Human Rights Law Group, a non-governmental organization engaged inhuman rights advocacy, litigation and training around the world. The Law Group works to empower grassroots activists to protect and promote human rights in their own countries. The advocacy Bridge Program is a two-year graduated training program, allowing delegates two successive years of participation. Second year delegates serve as mentors to first-year delegates, and they are able to return to Geneva with reports and advocacy strategies developed with input from civil society groups at home.

Dr. Wright traveled to The Hague, Netherlands where she attended the United Nations Framework Convention on Climate Change (UNFCC). The convention was held to finalize commitments to greenhouse gas emissions, November 18-21, 2000.  A Climate Justice Summit was held in conjunction with the convention  from November 13-24, 2000. It was organized to discuss and develop a response to the impacts of climate change and the Kyoto Protocol on different communities around the world. Dr. Wright’s letter of invitation noted that, because of her outstanding contribution to the environmental justice movement in the United States, it was felt that her participation in the Summit would greatly enhance their (the Non Governmental Organizations’) response to the climate change negotiations.

The World Summit on Sustainable Development was attended by Dr. Wright, staff members Ebony Turner and Judy Jackson, community representative Elodia Blanco, and EJ Scholar, Melony Lewis.  At this summit, commitments were made on expanding access to water and sanitation, on energy, improving agricultural yields, managing toxic chemicals, protecting biodiversity and improving ecosystem management.  It was attended by more than 22,000, including world leaders, NGOs and members of the press.

The Second National People of Color Environmental Leadership Summit was held in October of 2002. The summit was attended by  over 1400 delegates from around the world. The summit, chaired by Dr. Wright, builds on the legacy of Summit I, held in 1991. It was considered to be the single most important event in the history of the Environmental Justice Movement. Dr. Bullard of the CAU EJRC says that this summit expands and extends the environmental and economic paradigm to address globalization and international issues.  A special dinner was held to honor “sheroes” of the E.J. Movement. The “Crowning Women Bread and Roses” dinner recognized twelve women for their service to the E.J. movement.